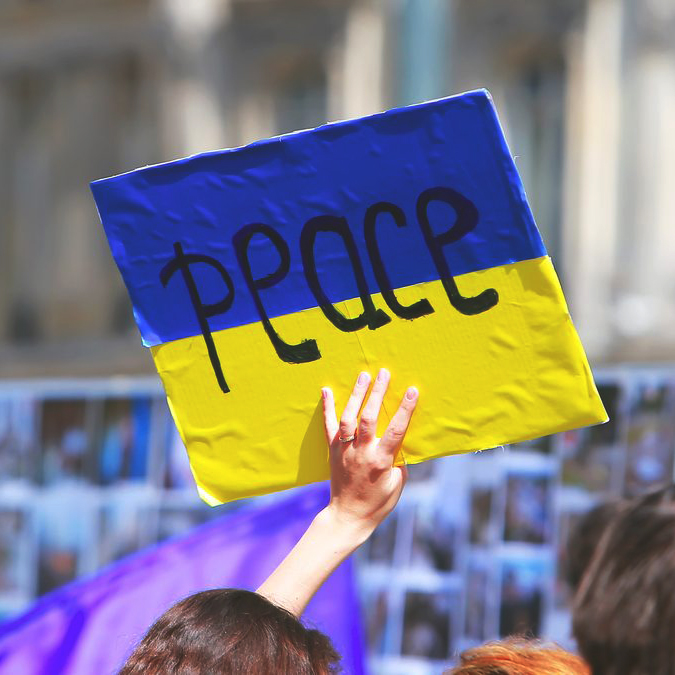 How to Stop the War in Ukraine

As awful as the war has been so far, what has occurred is only the first act in an apocalypse that will certainly result if this war continues. Confronted with widespread international humanitarian, food security, and economic catastrophe, the time has come for the world leaders everywhere to advocate an immediate stop to the fighting and begin mediation of an equitable and durable resolution to the conflict. I have a six-point strategy for how to make that happen.

First, stop throwing more gasoline on the fire. In the first six weeks of fighting between late February and the end of March, military aid commitments to Ukraine totaled nearly $6 Billion. 80% of that aide came from the U.S. In May, President Biden was successful in getting Congress to increase that figure by a factor of 7. That kind of military spending in a war zone the size of France may have the effect of preventing Russia from winning, but certainly at a devastating cost to the Ukrainian population of some 40 million.

Ukraine is now suffering some 500 deaths and 2,500 wounded a week. These are numbers on par with the U.S. at the height of the Vietnam war in 1968. More than 50% of the children and 30% of the civilian population have been displaced. 15% of the population have left the country. Poland alone has been saturated with some 3.5 million refugees. Why would anyone think such numbers are sustainable? Ukraine faces utter destruction under the relentless, withering conflict, the sheer volume of added weapons being introduced every week, and the inevitable response from the Russians that will result. The risk of a dramatic, increasingly irreversible escalation of the conflict world-wide is very real. If that’s not the start of WWIII, then what would be?

The world is beginning to experience dramatic disruption to food supply with Ukraine unable to move more than 50 billion tons of wheat, barley, corn, sunflower oil, and other agricultural products to market. Germany is beginning to experience very significant energy problems. World-wide inflation is rampant, with food, oil and gas prices leading the way. None of the saber-rattling, propaganda, and dubious initiatives promoted by the West in the early days of the war have had their intended affect. It is time for a serious change in the way the West is dealing with the conflict. We need more statecraft and less bravado, and we need it now!

Second, walk away from the dishonest narratives. Political leaders and media pundits from both sides of the isle have bombarded the West since the start of the war with false two-dimensional narratives that harken back to the days of the Cold War. There has already been a significant shift in the media narrative in the last few weeks. For example, the April 27th edition of the Wall Street Journal front page large type headline read: “Russia Says NATO Is Fighting Proxy War with Rising Risks.” A particularly provocative headline because it put the essential question on the table: “Are they?” In the weeks since that headline appeared, most major media publications began shifting their stances from “NATO did nothing wrong, nothing to see here,” to “Nothing NATO did is an excuse for what the bad man Putin did.” The June 1st New York Times International edition Opinion section led with a remarkable full-page guest essay by Christopher Caldwell that declared in a half-inch-type headline: “The war in Ukraine may be impossible to stop. And the U.S. deserves much of the blame.” How many more Ukrainians will needlessly die while the media wordsmiths its way through gaps between the narrative they started with and the inconvenient truth?

Third, rethink our assumptions about Russia’s motives and commitment. I’m certainly no apologist for Putin, but to claim that NATO is blameless in creating this conflict is an absurd obfuscation of reality. This war was more than 30 years in the making, with a long list of red lines knowingly crossed by NATO in the process. With every move, Russia was backed further into a corner that, from their national security perspective, was undefendable. Putin made speech after speech going back to 2006 about those red lines. Few were listening. Certainly not NATO and U.S. policy makers. Serious concerns raised by distinguished Russia experts, such as Henry Kissinger, Robert Gates, and many others were ignored.

There is little to be gained by reviewing, at this point, the highly questionable overreach of NATO in contributing to the conflict we are in now. Nor in debating the foolishness or desperation exhibited by Putin’s proceeding with the invasion. Ukraine has certainly overperformed due to the extraordinary support received from the West, particularly the U.S. Russia has underperformed due to the systemic weakness of its 20th Century military machine. It will not matter in the end. Russia has a vastly larger military than Ukraine is capable of holding off without direct NATO intervention. Russia is already shifting its military strategy, starting to fight a little smarter, and is most certainly all in. If Russia is famous for anything militarily, it is its ability to grind. They’ll keep at it for as long as it takes.

Fourth, abandon an unworkable and dangerous foreign policy. The shift in U.S. policy, as declared by Sec. Def. Austin in April, to not only defend Ukraine against Russia, but to inflict irreversible damage on Russia simply poured more fuel on the fire to no good purpose. If it was arguable that Ukraine is fighting a proxy war on behalf of NATO, Austin made it perfectly clear that Ukraine is actually fighting a proxy war on behalf of the U.S. Why would the Biden Administration announce such a provocative position to the world? More importantly, what would you think if you were Putin?

The Biden Administration’s premise that it can win in Ukraine is based on the presumption that Russia can lose. But Putin’s perception is that Russia can’t afford to lose. When has any nation, faced with what it perceived as an existential threat to its survival, failed to use whatever resources it had to survive? Nuclear weapons are most definitely on the table. Yet, the Biden Administration has persuaded itself that Russia wouldn’t dare use them. I think they are wrong. When it comes to nuclear weapons, being wrong is not a luxury the world can afford.

Senator Mitt Romney’s New York Times May 21st very provocative guest essay, “We Must Prepare for Putin’s Worst Weapons” poured more fuel on the fire by daring Putin to use his nukes. How must the people of Ukraine, Poland, Hungary, Slovakia, and other central European nations in harm’s way have reacted to such cavalier disregard for their fates? Every real-world challenge cannot be reduced to politically convenient absurd platitudes. The ability of the U.S. to conduct effective statecraft and diplomacy is essential to our ability to influence a tumultuous world for the better. Yes, we have a big stick. But it’s the quality of and consistency of our narrative that either calms the waters or stirs the pot.

Fifth, clarify our role as a Nation in the world going forward. As brilliantly articulated in George Friedman’s book, The Next 100 Years, U.S. foreign policy since World War II, irrespective of the political party in power, has been to maintain world hegemony by taking any actions necessary to destabilize regimes or movements anywhere that could rise to challenge us. The underlying motive was presumed to promote democratic principles and act as a force for good in the world. In other words, for better or worse we undertook to be the world’s policeman.

U.S. policy actions, inactions, and reversals of longstanding policies in recent years have confused our allies and brought our commitment to world hegemony into question. Biden’s shameful abandonment of the Afghan people and our withdrawing of support for the Saudi war against the Iran-backed Houthis, are just two very recent examples. Followed, almost immediately, by taking on a new, complicated conflict, and actively working to escalate rather than resolve it. Historically, the U.S. would have used its power to resolve this kind of conflict. Obama demurred on a golden opportunity to resolve the conflict in 2014 when Russia annexed Crimea.

Sixth, a mediated settlement is the only way out. Turkey tried and failed. Israel tried and failed. Perhaps it shouldn’t be a country leading the mediation. There are no countries left without a dog in the fight. I propose creating a negotiating team of extraordinary individuals whose reputations, skills, and acumen are beyond reproach. An international team capable of approaching the conflict objectively, logically, strategically, and compassionately. I nominate former Israeli Ambassador to the U.S. Michael Oren to lead the team. Give him the task and he will quickly assemble an international team of diplomats, scholars and deal makers who can achieve a durable resolution to the conflict.

Setting expectations for what the resolution will look like, I can promise that no one will like it. Not Putin, Zelensky, Biden, NATO, the EU. No one. Because a durable resolution requires that no one win, and no one lose. Some resolutions will be obvious. Ukraine can never join NATO. Zelensky has already declared it on multiple occasions. Ukraine neutrality going forward is the key to a good start. But there are many other complicated issues to be put on the table that must all be resolved, most of which the media never writes about, for example, water security for Crimea. Let’s start with an immediate sixty-day cease fire with Ambassador Oren assuming the mantle of responsibility for mediating the conflict. All weapon systems stay where they are. No resupply by either side of munitions. Only humanitarian actions and people movements anywhere but forward. The world simply cannot afford the risk and unintended consequences of allowing this small war to turn into a large one.

Steven Myers, author of the Amazon best-selling book Cross Winds:  Adventure and Entrepreneurship in the Russian Far East is a two-time US Air Force veteran, a pilot, and Cold War warrior of the Soviet era. Later as the founder of one of the first post-Soviet joint business ventures in Russia, he gained first-hand knowledge of the region and countries headlining the news today. He has a unique understanding of Russia’s history, culture, leadership, and people. He’s a graduate of Stanford University in Mathematics, a four-time CEO, and recipient of many awards for distinction, including E&Y Entrepreneur of the Year and the FAA Wright Brothers award.

A pragmatist and problem solver, his leadership roles on many of our nation’s most vital national security programs of the last 50 years provide him with a unique understanding of our nation’s national security posture. He served on the US Department of State Advisory Committee on International Economic Policy for three terms under two Secretaries of State. He served as a leader of a major cyber security inter-agency task force directly reporting to the Secretary of the Department of Homeland Security. As a member of a dozen fact–finding NGO delegations, he has traveled extensively, meeting with government dignitaries, US embassy staff and foreign ambassadors in many countries.